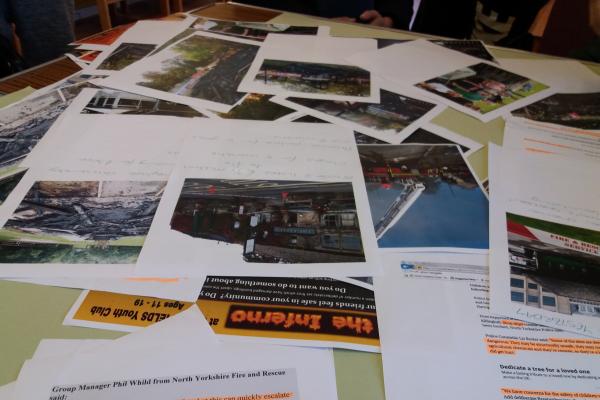 ‘Stop the Inferno’ is a multi-agency project which we are running at Jennyfields Youth Club in Harrogate, in partnership with North Yorkshire Fire Service, North Yorkshire Police, Fairfax and Bilton Youth Clubs.  Funding from Harrogate Community Safety and the Granby My Neighbourhood group is paying for a graphic novel to be produced by the young people at Jennyfields (with those attending Fairfax and Bilton being invited to attend).Fire fighters and a PCSO have visited the youth club to work with the young people on a story outline – using photos from recent fires in Harrogate.  Two of the crew had attended some of the fires we were discussing so they were able to add real life experience to the recount of what happened.We have an artist booked from NYCC’s Connecting Youth Culture (CYC) to come along and take photographs, and start some of the artwork, for the ‘comic’ which will highlight the consequences of fire setting.  This will then be printed and distributed around the community.  There will also be a trip to the fire station, sometime after October half term, so that the young people can speak to the fire crews and look around the vehicles, as well as watch a demonstration.  We have already had some positive response since the first week as the police posted the project onto their Twitter feed.